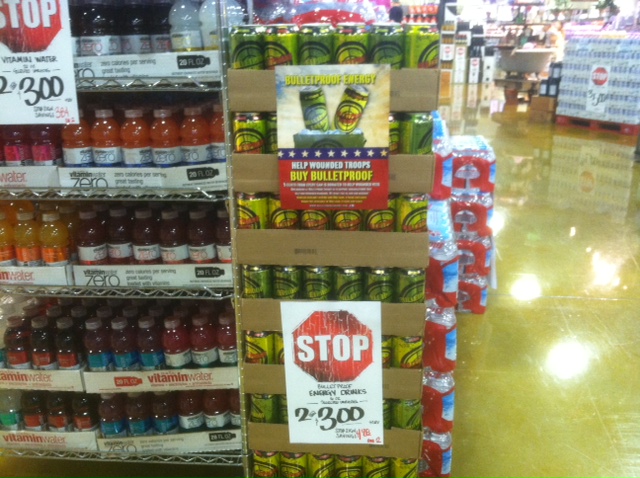 We are proud to announce the Raley’s store in Granite Bay and Vacaville, CA are now carrying Bulletproof.

“We are happy that Raley’s decided to take us into their stores. This is a great opportunity for Bulletproof and give customers in the Sacramento area another great place to buy our products!” said Robert Dohlke, CEO for Bulletproof Brands Inc.

Bulletproof Brands Inc. was founded in 2010 with the mission to help wounded veterans. Bulletproof is veteran-owned. Bob Dohlke is one of the founders of Bulletproof and is a 20+ year Air Force Veteran. He flew over 8,000 missions and 900 combat missions in his career. He is a recipient of “The Distinguished Flying Cross with Valor.” He is a true American Hero.

At Bulletproof Energy, we believe in two things:

At Bulletproof, we donate 5 cents of every can sold directly to foundations that support our wounded troops! We are very proud to be able to provide help to our wounded vets.